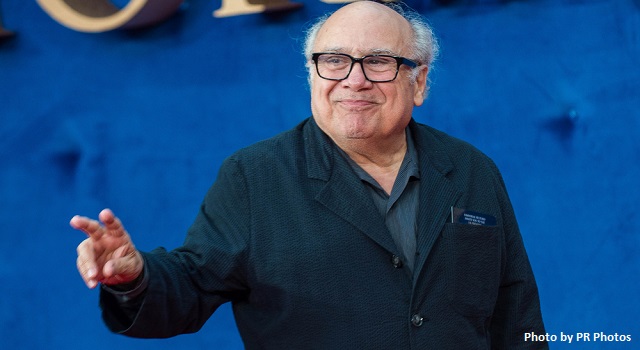 Super Bowl 52 was amazing, so it won’t be remembered for any of the commercials. There were a few that are memorable–for better or for worse–such as Danny Devito (pictured) playing an M&M. See that commercials and others below.

Here’s what stood out:

1.  One of the best ‘commercials’ was actually just a promo for the NFL.  They had Eli Manning and Odell Beckham, Jr. of the Giants practice a touchdown celebration . . . which turned out be the “I’ve Had The Time of My Life” dance routine from “Dirty Dancing”, complete with “the lift.”

2.  Tide was all over the Super Bowl this year, with a series of ads featuring David Harbour . . . he plays the cop Jim Hopper on “Stranger Things”.  The first commercial started out as a car ad, then a beer ad, then a perfume ad . . . and just kept going.

3.  Another clever parody was the fake trailer for the “Crocodile Dundee” sequel, with Danny McBride and Chris Hemsworth.  But it was just a commercial for Australian tourism.  Although it did have a cameo from the real Crocodile Dundee, Paul Hogan.

4.  Jeep used the celebrity factor in a cool way.  They had Jeff Goldblum re-enact the famous chase scene from the first “Jurassic Park”, where they drive away from a T-Rex.  But he was actually just daydreaming in a Jeep dealership.  It was a good tie-in to all the “Jurassic World” trailers during the game too.

5.  M&M’s had Danny DeVito as an M&M that becomes human, and runs around telling everyone to “eat me.”  Did anyone else feel weird letting their kids watch that one?

6.  Michelob Ultra had fun with the whole celebrity cameo thing.  It was a two-parter, where Chris Pratt got all buff to play the spokesperson for Michelob Ultra.  But it turned out he’d only landed a role as an EXTRA. So in the second part, he stood in the background while a series of regular Americans sang an ode to beer called “I Like Beer“.  And it was actually a pretty catchy song.

7.  A lot of people liked the Amazon Alexa ad where Alexa lost her voice.  Jeff Bezos had a bunch of celebrities fill in, like Gordon Ramsay, Cardi B, Rebel Wilson from “Pitch Perfect”, and Anthony Hopkins.   But it didn’t go as planned.  The scene where Rebel Wilson tried to ‘set the mood’ for a guy’s party by talking dirty was hilarious.

8.  Then there was the lip sync rap battle between Peter Dinklage from “Game of Thrones” and Morgan Freeman, repping Doritos and Mountain Dew.  Dinklage did the Busta Rhymes verse from “Look at Me Now” by Chris Brown.  And Morgan Freeman did “Get Ur Freak On” by Missy Elliott.  It worked because they’re the two celebrities LEAST likely to engage in a lip synch rap battle.  And because everything Morgan Freeman does is cool.  But one thing could have made this one of the best Super Bowl commercials EVER . . . if those two guys had actually rapped.  How cool would that have been?

10.  Did anyone care about the big “Game of Thrones” style” Bud Knight finish to Bud Light’s “Dilly Dilly” ad campaign?  Seems like a lot of time and money went into forcing the phrase “Dilly Dilly” into popular culture.  Did it work?  Let’s hope not.

11.  Some people had issues with the Dodge Ram commercial “Built to Serve,” set to a speech by Martin Luther King.  First of all, it was confusing because there were 30 seconds of blank screen before it, which turned out to be an equipment failure at NBC.  But then the commercial didn’t have anything to do with MLK, or doing good things.  Which is a mistake, since some commercials WERE about companies doing good things . . . like Budweiser sending water to Puerto Rico, or Matt Damon and Stella Artois promoting Water.org for developing countries.

12.  Lots of other ads went the emotional route without getting any backlash.  The very first commercial was a really good Toyota ad about Lauren Woolstencroft . . . she’s a skier who’s won eight Paralympic gold medals.  The trick is to get your message in while saluting someone else, and not taking center stage.

13.  Other commercials were more heavy-handed with the politics.  Like the Coke ad where there’s a Coke for every single kind of person.  And the T-Mobile one, with all the babies of different races and ethnicities.  That’s the one with the voiceover from Kerry Washington that said, “You’ll love who you want.  You’ll demand fair and equal pay.  You will not allow where you come from to dictate where you’re going.”

And if you paid attention, that gentle soothing music they’re listening to is a nursery version of “All Apologies“, by Nirvana.

14.  The biggest movie trailer was for “Solo: A Star Wars Story“, which comes out May 25th.  It may have been the only commercial during the game that WASN’T online weeks before the broadcast.  So it was a surprise.  Especially since all the news about the movie over the past year has been about how it might be a trainwreck.  But we have a bad feeling the trailer won’t end the rumors, or heal the divide among “Star Wars” nerds over the recent movies.

A new survey found the majority of people are pretty sure Thanksgiving is going to be TWICE as stressful as usual this year.So how are people coping? They’re already fantasizing about washing that stress away by diving face first into a trough of mashed potatoes. Here are the 10 side dishes people are already dreaming…

Saturday, November 28, is Small Business Saturday. This is a campaign to remind you to support local businesses. While the nation’s largest retailers see a huge spike in sales for Black Friday, many of our local businesses are left in the shadows. Small businesses have struggled much more than large companies during the pandemic, and…

It can be hard to get ANY “alone time” right now . . . other than those sweet, sweet moments when you’re sitting on the can.And now, there’s an app that wants to help you make the most of your alone time on the toilet.It’s called Clementine, and it’s filled with meditation sessions that last…

Here’s something exciting for fans of “The Office” (like me!): you have the chance to win a coffee date with the cast while supporting a good cause. The cast of the beloved NBC comedy have teamed up with the Boys & Girls Club for a fundraiser providing meals, emergency supplies and activity kits to help…

With 2020 as the exception, my son and I take an annual roadtrip. It’s typically a week long so we use quite a bit of gas as we drive 1,200 – 1,500 miles. As I look at ideas for this year’s trip, and see gas prices rising rapidly, I decided I would share some tips…

My son and I enjoy taking road trips to small, desolate ghost towns. Well, I just added one to our list.Someone spent some serious time and found the weirdest town name in all 50 states. For California, they gave that crown to Mormon Bar. Huh? It’s in Mariposa County and is a ghost town. It…