Do you have a great Boss?? I’m lucky that I do! Today is a day to celebrate Bosses because it’s National Boss’s Day! Grab a card for your boss or at least tell them how much you appreciate them today!

Today is also my daughter, Megan’s 21st Birthday! Happy Birthday Megan- I could not be more proud of the special human that you are!!

National Boss’s Day on October 16th recognizes the hardworking boss overseeing the workplace. Employees across the United States show appreciation and thankfulness to their bosses. (They remember their boss’s kindness and fairness throughout the year, too! )

How Many Bosses are Out There?

“By working faithfully eight hours a day, you may eventually get to be a boss and work twelve hours a day.”
– Robert Frost

“The best time to start thinking about your retirement is before the boss does.”
– Anonymous

“If you think your boss is stupid, remember: you wouldn’t have a job if he was any smarter.”
– John Gotti

“A good manager is a man who isn’t worried about his own career but rather the careers of those who work for him.”
– H. S. M. Burns

“The executive exists to make sensible exceptions to general rules.” 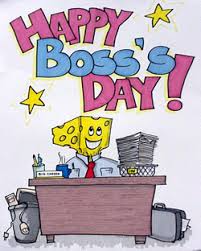