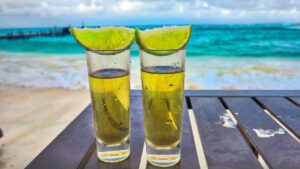 Tequila! Who has visions of Pee Wee Herman right now? I personally had a bad experience with tequila in college (Who didn’t?) so I don’t drink it, but plenty of people love it! So let’s learn about Tequila!

It’s from a plant (which means it’s healthy, right?)

Have no fear, gluten-free folks! Tequila is perfectly all right for you to drink. Tequila is made from fermenting the juice from the blue agave plant, which has a core called piña because it looks a little like a pineapple. Once the piña is harvested, it’s brought to a distillery to be roasted to unleash its juices, which are fermented, distilled and aged before being bottled.

Tequila is a type of mezcal, but mezcal is not tequila

OK, it’s a little confusing, so let’s break it down. Mezcal and tequila are both made from agave, but tequila can be made only from the blue agave plant. The flavor profiles can be a little different, with mezcal being a little smokier.

Tequila must be made in a specific area of Mexico

You know how true Champagne has to be made in the Champagne region of France? It’s a similar thing here. In order to be labeled tequila, production has to occur in the state of Jalisco or in some neighboring states. But most tequila production is in Jalisco.
Learn more about Tequila here!