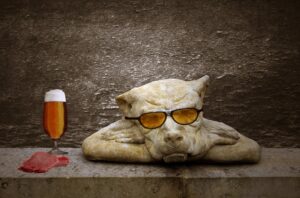 Busch Beer has introduced a new, non-alcoholic “brew” for dogs yesterday, August 26th, which also happened to be National Dog Day. Busch Dog Brew is a bone broth that, Busch’s says, has lots of nutrients and a dog-friendly flavor. And for anyone interested, it is also safe for humans to drink, according to the brewery. The company says: “After a long day there’s nothing quite like having a Busch with a friend, and with so many new pet owners across America this year, we wanted to create a brew to give our fans a chance to share a Busch brew with their ‘best friend’.” Anheuser-Busch has also partnered with Best Friends Animal Society to help ­pooches find a forever home, hopefully, stocked with Busch Beer.