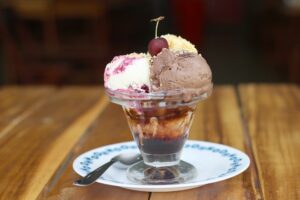 They’re called “Doggie Desserts.”  And instead of dairy, they used sunflower-butter as the base, so it’s easier on dogs’ stomachs.

There’s a peanut-butter-and-pretzel flavor called “Pontch’s Mix” . . . and a cookie-and-pumpkin combo called “Rosie’s Batch.”  (Is it crazy that I kind of want to try both of those myself?)

They’ll hit stores nationwide this month.  Each four-ounce cup costs $3.  Or $5 for a four-pack.

Ben & Jerry’s isn’t the first major brand to do this, by the way.  Purina already has a line of K-9 ice cream called Frosty Paws.

But what we like about this one is the packaging they went with looks EXACTLY like normal Ben & Jerry’s ice cream.  So be careful when you reach into that freezer.