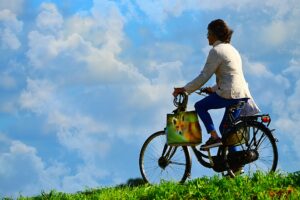 Have you been hitting the hot yoga and spin classes, but aren’t dropping the pounds you’re hoping for? Duke University professor and evolutionary anthropologist Herman Pontzer says that’s because exercise is pointless when it comes to weight loss. He’s spent his career researching the Hadza tribe, a group of hunter-gatherers in Tanzania, and claims that the key to losing weight is diet, not working out.

Pontzer isn’t saying exercise isn’t good for us, in his new book, “Burn,” he points out benefits like easing joint inflammation and building strength and endurance. But he says it won’t do much to lower the number on the scale. “We’ve all been told that the more active you are, the more calories you burn,” he explains. “But our bodies aren’t simple engines. When you spend more energy on physical activity, the body spends less energy in other places.”

The professor says we’re not in control of our metabolisms, which is why he believes the only way to slim down is through diet. His suggestion for those with a goal to lose weight? Cutting 500-calories a day, or 35-hundred calories a week, which he says will result in losing about a pound a week. “Use diet to watch your weight,” Ponzer says, “and exercise for everything else.”