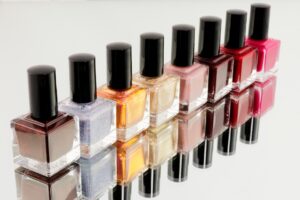 April 25th is National Mani Pedi Day! Finally, a day off! Well, sort of. At least that’s what it feels like when you get a mani pedi. We have no idea who created this holiday or why, but it’s pretty easy to figure out how to celebrate – go get one! No time? Why not give a gift of a mani pedi to someone you dig?

Fun Facts About Your Nails and Nail Polish

Nail polish has been around since as early as 3000 BC, but did you know that some of the ingredients included beeswax, egg whites, gelatin, and vegetable dyes?

Nail polish was used to identity class rankings in Ancient Egypt. Nude and light colours were worn by people in lower class, while high class women painted their nails red.

Acrylic nails were introduced in 1978 and were invented by a dentist named Fred Slack. Years earlier, in 1934, a dentist by the name of Maxwell Lappe created a product called Nu Nails, which was an artificial nail designed for nail biters.

Opened bottles of nail polish last for about two years. When air is introduced to nail polish after a bottle is first opened, some ingredients evaporate, which changes the consistency and formula of the polish.