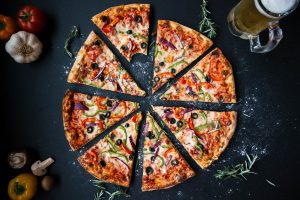 Nathan Myhrvold and Francisco Magoya are the authors of “Modernist Pizza,” a 1,700-page book hitting shelves on October 5th. What’s special about them and the book is that they sampled almost 400 pizzas in more than a dozen cities all over the U.S. and have concluded the best pizza city in America is – Portland, Oregon.

Myhrvold is a former Microsoft exec and co-author of Modernist Cuisine and Modernist Bread and says about Portland’s pizza scene “we had an inking it would be good, but we were shocked at how good it was.” The other cities that they visited were Los Angeles, San Francisco, Detroit, Seattle, St. Louis, Old Forge, Penn, New Haven, Jersey City, New Jersey, New York (of course), Chicago, Quad Cities in Iowa and Illinois, Phoenix and Philadelphia.

There were standouts and disappointments in many locations and surprisingly, many New York pizzas were less than great in their opinion. Who REALLY has the best pizza? The floor is yours.